In WAR RIG, you and your friends ride atop a mighty machine of metal and fuel.  The wheels on which you live carry you from settlement to settlement, searching for supplies and scrap in the wasteland to scrape out a living.  But the world is full of many threats.  You must rely on each other to survive in the world, but you must also know how to conserve your resources for the good of the group (or, maybe, your own).  The world will grind you down, but hope brings you and yours to the next dawn.  Hold on to it.

In order to download this minimalist ttrpg you must purchase it at or above the minimum price of $5 USD. You will get access to the following files:

War Rig is a Mad-Max-esque post-apocalyptic vehicle caravan game. It's 14 pages, nicely crunchy but not overcomplicated, and it is criminal that it is not getting more attention.

You play as the crew of spikes-and-flame-pipes-style offroad rig, traveling Oregon Trail style across the landscape, scavenging and enduring danger. Play is broken up into camping, convoying, and exploring on foot, and the mechanic for helping other players survive danger is opposite to the mechanic for surviving on your own, so you have to mind your balance between selfish and altruistic actions. Go too far either way and someone's likely to die, hurting the crew's overall survival chances.

Honestly, I don't know that minimalist is the phrase I'd use to define it. It feels very fully realized, it just doesn't need to use lots of extra rules and exceptions to get to that point.

My only significant critique is the overview on page 2, which I think did more to confuse me than to set expectations for the mechanics, and the general way mechanics are presented. They kind of blend into their respective paragraphs, and I wish the book was a little bit more

Complex Action: GM sets a target number of successes, player rolls d6s one at a time up to STAT total, if they hit the target before reaching their stat they get the remaining rolls as points of HOPE or can donate the rolls to a teammate.

The Walk Phase (where you get out of your vehicle and face problems alone) also feels a little strange mechanically, as it forsakes the really cool dice system entirely for just straight bargaining---which I don't mind, but which doesn't feel as supported by the rest of the book. Maybe just calling it the Barter Phase or something like that would help, as it seems really good for interacting with merchants and the like, but the game's flavor example in the section is about a fistfight, which feels a little strange.

If I could add one thing to the game, it would probably be a system for figuring out what the crew's next destination is. It's not hard to imagine threats in the setting, but the game *really* benefits from having the crew working towards something. Even just some question at the start of the game that frames a question like "what thing does your group believe will allow you to find peace in the wasteland?" would help.

thanks so much for the review! 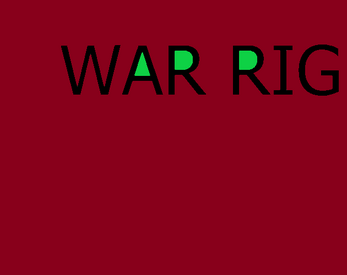